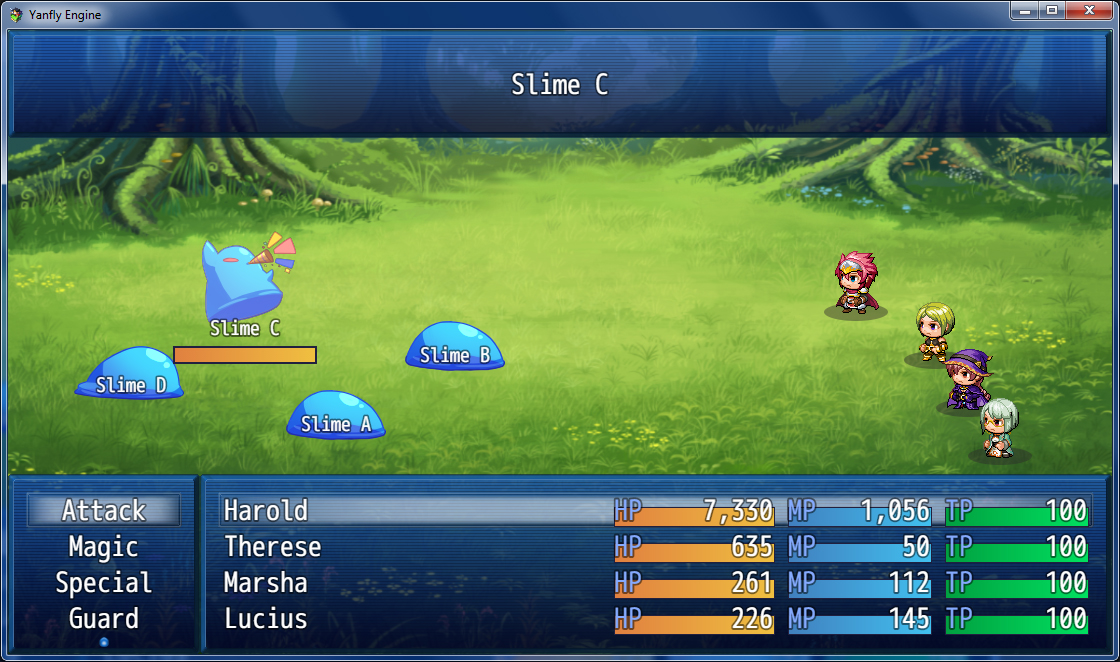 I’ve begun work on this a few weeks ago because I was notified that another animated enemies plugin clashes with my battle engine, due to incompatibilities. So rather than patch those incompatibilities, I figured it’d be easier if I just made my own plugin for it. As a result, I worked up this plugin and allowed my supporters to beta test it. I haven’t been reported many problems yet, so I imagined it’s in a relatively stable state. So now, it’s time to push it to the next step: more open beta!

Also, please make sure you have the most updated versions of the plugins (including the Battle Engine Core). You can grab them here.

This plugin draws its animated battler data from your img/sv_actors folder. So if you want your enemy to look like Harold, you’d use this notetag in the enemy notebox:

If you want to randomize the graphic used, just insert more into the notebox like this:

This plugin does NOT require you to have a matching enemy graphic with a matching filename in your sv_enemy folder or enemy folder.

There are “breathing” options for both static and animated enemies. Since having breathing options for the animated enemies is a bit redundant, I enabled it strictly for the static enemies only (although you can adjust this in the parameter settings. If you have Action Sequence Pack 2, enemies can now float by default, too. You can change the intensity of the breathing/floating through the plugin parameters and/or notetags.

You can insert multiple sideview graphics to randomize your enemy appearances. Whatever you throw into the notebox will be whatever that enemy can potentially become.

Multiple sideview weapons can now be inserted to randomize the type of weaponry they’ll have. You can do this using either the simple notetag (which uses the default settings) or the advanced notetag, where you can customize the weapon index, attack motion, and animation associated with it.

Idle motions also have a random pool, too. This way, enemies can appear a bit more dynamic if you decide to use only one battler graphic. My personal favorites are wait, walk, and victory. It’s fun seeing happy battlers. XD

Almost all of the motions are now customizable. This ranges from Damage to Evade, Escape, Guard, Abnormal, Sleep, Dying, and Dead motions.

And for those wondering about the cute slimes I’m using in the image, it’s a battler sheet made by one of my good friends who will be making his introductory appearance very soon! 😀 You can grab the sprite sheet here in the meantime!

To see the cute slime in action, save it to your sv_actors folder, use the following notetags in an enemy notebox:

Anyway, happy beta testing! I’m not sure as to when the release of this plugin will be since there’s still a few more features I want to add. We’ll see~