I’m pretty sure you guys are sick of it by now, but yep, there’s another continuation.

Part 1 – Where we discover and dissect what code is stolen.

Part 2 – Where the coder in question straight up confesses.

Well, it seems that Foundat.io/n (apparently what they call themselves on Facebook) made a reply in a particular Facebook community. For those who don’t have access to the Facebook group, here’s their responses (thanks to KeepSwagKeeping for stitching it all together) Now, before you all go and raid it, I suggest against doing that. I’m only putting it out there to bring it light in case people question where this incident is coming from so I can bring things to light. I won’t be posting everything, but I will be taking bits and pieces. I will be jumping around a bit to keep things in context.

I’m going to say this straight up. Just because a plugin is unsupported or abandoned does not mean that they don’t work. In fact, I, myself, know of the quality that Galv, Victor Engine, and MogHunter can deliver and their code works just fine. Want to know how? Because your programmer stole them, put them into the same project, practically unchanged, and they work.

The only reason why some plugins don’t work together is because you, as a game developer, are trying to use two plugins that do the same thing together. From what I can tell, Day/Night cycles have nothing to do with Region Restrictions. Fogs have nothing to do with 8 directional movement. There should never have been any conflicts between these from the start. 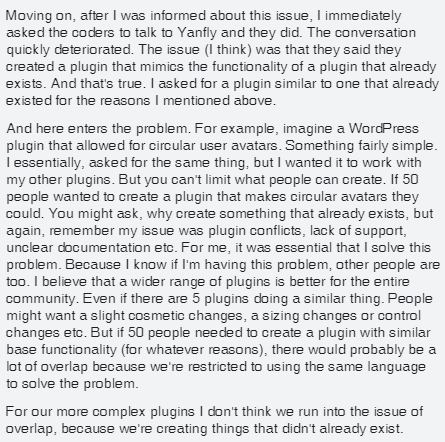 Like said before, the conflicts don’t exist unless the game dev is trying to use two plugins that try to do the same thing. And once again, just because it’s unsupported or abandoned does not mean it’s unusable. Committing to such an idea is disastrous and dangerous. Do you suddenly stop driving your car just because the warranty ran out? Or do you immediately stop wearing your sneakers just because the brand that made it no longer exists? Of course not. Plugins are the same way. They do not have a shelf life. They do not have an expiration date. Even my scripts from VX and VX Ace still work just fine for their respective software despite the fact I’m no longer supporting them.

This leads me to two conclusions: Foundat.io/n is either an inexperienced game developer, in which, they should not be trying to sell to the community when they have no clue how to even get their own foundation straight or they are making excuses to get a story started to sell stolen plugins from developers that aren’t active or are semi-active. 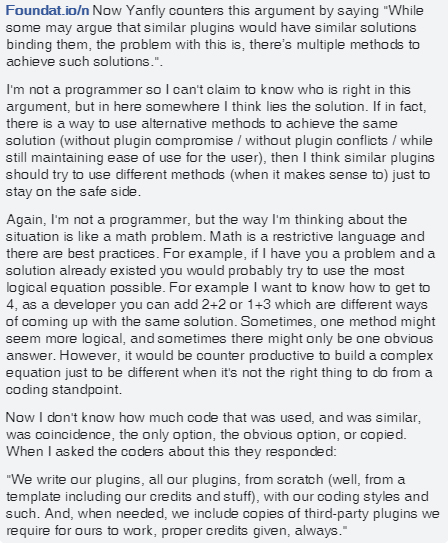 Here’s the problem with that argument. While I do agree it’s hard to be 100% unique when you’re trying to solve the same problem, do you use the same exact functions in the same exact order?

Aside from isMapPassible, I’ve made every single one of those functions in that same exact order. Is there any logical reason they ordered the same functions in the same exact way, too? What they also did was renamed “Forbid” to “Block” and took out the processRRNotetags. Now, here’s the REAL kicker. isEvent and isPlayer are functions that do NOT exist in the main code. In fact, these are additions made by mine. And the concept behind them is to utilize prototyping. Is there a reason to utilize the exact way I did something instead of doing a check for any of the following which accomplish the same thing?

Those may mean nothing to a non-programmer, so let’s put it into English terms. If I say, “That campfire is scorching.” The meaning is clear, the campfire is hot. There’s plenty of ways to say hot. Hot, burning, flaming, etc. The list goes on. But if you specifically target my exact function, in my exact order, with my exact methods, that’s plagiarism. I can do the same for Galv’s plugin and the stolen 8 directional diagonal movement, but you can piece together the evidence through what I’ve posted in part 1. In programming, there is no “more logical” path to choose from. My isEvent and isPlayer is not more logical than the other. In fact, looking back, I probably should have just used “this === $gamePlayer” instead because it doesn’t involve the unnecessary creation of two new functions. But that exact hindsight is all the more reason why I see so many red flags to this code being stolen. 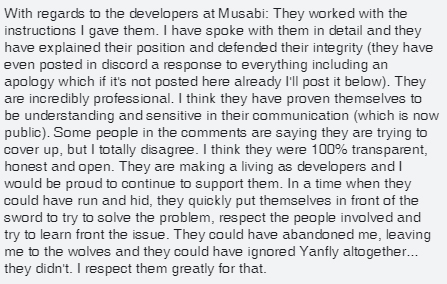 And I will be saying that as long as you, Foundat.io/n, continue to support these scammers, your work will never be welcomed here in the RPG Maker community. The fact you even dared to declare that you will continue supporting them shows that you disrespect every single one of us who contribute to the ever growing community for RPG Maker. From plugin creators to graphical asset devs to authors, writers, editors, to the Youtube/Twitch Let’s Players, to the moderators and administrators on forums and Discords, everyone who works hard to keep the community thriving, you disrespect them all by knowing that these people have stolen from the community and declaring you will still continue to support them.

And may the RPG Maker community never have to step in your direction ever again.