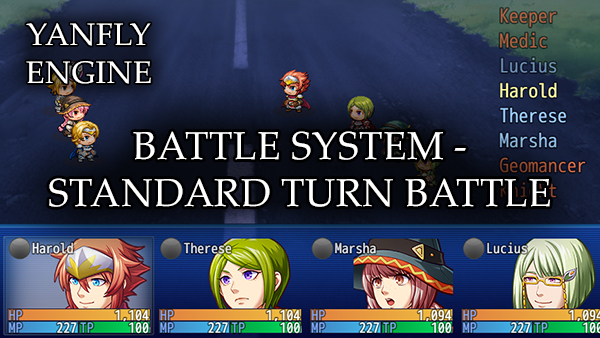 It’s been brought to my attention multiple times across the past few months that there’s been bugs with STB and forced actions. This has been finally fixed as of today’s update. Or rather, it’s been fixed for about a week ago, but has been in testing throughout the week before I decided to make it official. This is mostly thanks to Olivia asking me various questions in the making of her OTB battle system, which made me go back to reference STB on where to go for her as the two systems are very similar. Not only are forced actions fixed but so are instant casts for enemies, too. This, too, is also thanks to my interactions with Olivia once again.

You can get the updated and fixed version of the STB plugin here.

That said, I can imagine many of you have questions in regards to this update. Three of which, I can picture already so I’ll go ahead and answer them.

1. Does this mean you will continue to support STB once again?

I won’t say it will leave the discontinued status, but rather, it will be subject to bug fixes when the opportunity arises. After all, the three points made in this post remain true even in the current situation. The recent update to STB is what I consider to be an exception to the rule, if only to tie up loose ends.

2. Will you add in Action Times+ to STB?

Short answer: no. Long answer: It’s not something that fits in the scheme of STB due to the constant reliance and cyclical calculation of the AGI stat to determine the turn order (as that is an integral part of what makes STB work). The other reason is that the update to STB is mostly to tie up loose ends, as answered by the previous question, not an update to continue support and eventually add more features to it. However, if Action Times+ is a big part of your battle system and you would like for it to play a big role, STB would need to drop off the AGI stat’s influence on the turn order for it to be possible. When this happens, it actually becomes Olivia’s OTB battle system. I recommend you give that a try.

3. What is the difference between CTB, STB, and OTB?

This is a question I’ve seen asked often. And as it’s asked often, it’s better that it gets answered properly, as it is the responsibility of the game’s developer to understand each of the facets that govern his/her game’s mechanics.

CTB: Charge Turn Battle is a tick-based battle system. This means there are no such thing as a “battle turn” count. While “battle turns” are added in artificially through the plugin to just tie in the works of the Troop Event Condition, “battle turns” do not fundamentally play a role in determining the turn order of everything. In place of turn counts, “ticks” are used instead where a tick is a singular calculation that determines the proper positioning and relativity of each unit to each other in the grand scheme of calculating the turn order to determine which unit will have an action earlier or later. These “ticks” can be thought of as a clock ticking in seconds, only that the time in between battlers is removed and the time during a battler’s input is frozen. The said ticks will govern state “turns”, too, as they are automatically converted into ticks. In CTB, AGI is the king, the single most important stat in the whole game. A unit with a high enough AGI can potentially have multiple action turns before a unit with far lower AGI and will outlap the slower unit even after. With this in mind, CTB is the hardest to balance AGI out of the three mentioned battle systems thanks to “haste” and “slow” states being able to completely throw the battle system’s balance out the window.

STB: Part of the reason why CTB is so hard to balance properly is due to the fact that the editor is built completely around turn-based combat. STB makes a return to that from the tick-based STB back to turn-based. STB will also attempt to artificially balance the AGI stat by utilizing the rule of the “battle turn” imposed on by the battle system: Each unit is only allowed one turn by default regardless of their AGI value. Units with higher AGI values go earlier while units with lower AGI values go later. Because of this rule, AGI still has an immensely strong grasp on the battle system but not as strong as CTB did. AGI is constantly being calculated after each action to restructure the turn order in order to keep the balance and flow of the battle system. Exceptions can exist to this rule like Instant Casts, but Action Times+ aren’t as they are fundamentally different. In STB, those who stack AGI either before or during battle will often come out on top provided everything else is balanced. Maintaining “haste” on the player party and “slow” on the enemy troop is the key and core way of winning in nearly any game that uses STB and gives access to those play states/buffs.

OTB: Like STB, OTB is turn-based instead of being tick-based. However, it does a couple of interesting things.

So what does this say about OTB? Its mild AGI dependency, flexible turn order mechanics, and all around openness to turn order changes means that it’s actually NOT a battle system where the only way to combat AGI is to get better AGI (which is seen in the case of CTB and STB). And because of the all around openness in the battle system, things like Action Times+ can be utilized and included into it and flow just fine. So what anyone can conclude is that out of the three battle systems we’ve compared, OTB is the most AGI-balanced and flexible.

This isn’t to say OTB isn’t going to be without problems. In fact, making a battle system flawless is next to impossible. Not all plugins or the Tips & Tricks effects we’ve learned and made will be necessarily compatible with it. However, this isn’t the fault of OTB, but instead, the fault of RPG Maker MV’s original battle structure. A lot of the original battle structure throws a lot of chaos into making it structurally compatible with old and/or future plugins. Fortunately, by Olivia tying her OTB to the Battle Engine Core, a lot of potential plugin compatibility issues are fixed but not all.

Whew, typed a lot more than I expected to. While I am definitely in favor of OTB, I also recognize that for certain games out there, CTB or STB is better suited for them. For this reason alone, I made these small updates to STB to hopefully make the lives of some certain people a little easier.